Bonnie Lebesch is a visual artist living in Fort Collins, Colorado. Lebesch creates abstract acrylic paintings and mixed media pieces. Her life and work are informed by practices in mindfulness, intentional healing, and tai chi. Bonnie had a career as an artist and designer in Seattle’s high-tech industry before dedicating herself fully to fine art in 2006.

Lebesch has applied her visual design talents to a wide variety of projects including photography, video art installation, print graphic design, interactive content design, and educational curricula development for the professional design software industry, until finally refocusing on a fine art career in 2005.

Bonnie Lebesch has designed and written a series of books titled The Illuminated Spirit, Illustrated Patterns of Subtle Energy. These drawings and accompanying text are informed by years of meditative practice and exploration of subtle states of consciousness and creativity. 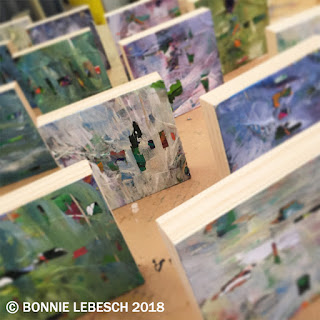 She self-published an interactive children’s music toy titled Stella and the Star-Tones on CD-ROM, (1998), and an iPad app, (2011).

The Healing Herb Series stem from an interest in the energetic healing properties of medicinal plants. Bonnie Lebesch used digital photographic montage to depict the alchemical properties of the plants used in traditional Chinese medicine. She explored working with locally harvested plants for their healing characteristics.

Her interest in subtle energy continued to inform her work as it expanded into paint. Beginning in 2013, Bonnie Lebesch's series the Love Letters spurned a journey that dramatically deepened her creative process. It is an immensely intimate body of work, with each painting focused on healing a personal story. This theme continues to expand in her work today,

In 2006, Bonnie Lebesch was chosen to participate in Seattle's Artist Trust Edge Grant Program of professional development for emerging artists.

Bonnie Lebesch received an MFA in Video Installation from New York University and BFA in Graphic Design from the University of Illinois. After receiving her graduate degree Lebesch moved to Seattle, WA where she pursued video art while simultaneously embarking on a fifteen-year career as a user interface designer. She earned numerous national and international design awards for her work as designer and art director.