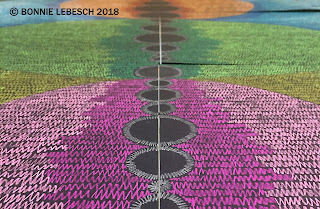 The Movement in Stillness drawings exhibited in 2018 at Wolverine Farm, Fort Collins. The show included 24 small drawings (12" x 9"), one 18" x 25", and two XXL tiled drawings on paper (56" x 75"). The two large tiled drawings are in contrast with one another; one is as still and simple as I could go. The second, well, I wanted it to be wild... but I could only go a certain distance towards wild within the same constraints of form and media. They represent two directions, the yin and yang of expressive energy. 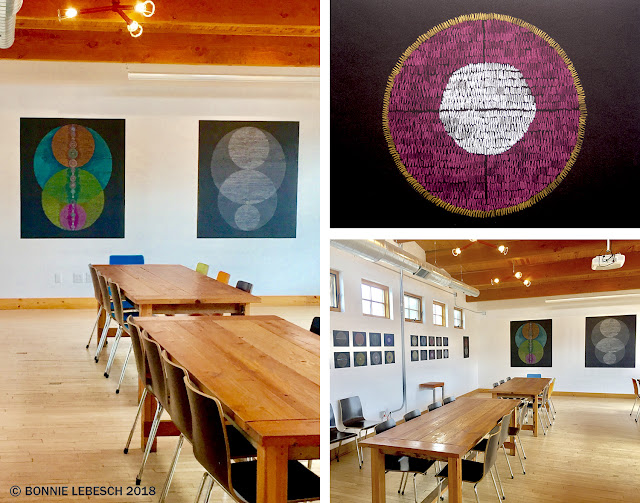 This series began when I was teaching Mandala Drawing classes. I began drawing in a simplistic, repetitive, meditative way, and I thought, what if I could JUST draw this way for an entire drawing? What would it feel like to limit myself to this one constant expression? Could I maintain this composure without giving in to the whim of wild lines?

And so I continued like this for quite some time, and it was exquisite. I found the drawings to be grounded in a way my artwork rarely feels. They are like distillations of much more subtle things like nature or sound. They could be cross sections or waveforms. They speak. I get still around them. 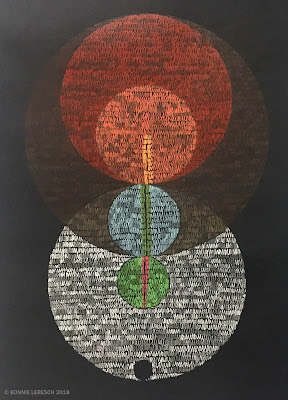 Recently I was talking with a friend about the nature of my studio practice. Actually, of my studios practice - as in, I have two studios. The work I do in each place differs because I have each space supplied with different materials, one messy, the other more technical and clean.

When I paint, I tend to experiment and play and explore. I push those boundaries into uncomfortable places in an effort to get comfortable with new ideas.

When I do more technical, clean work, I often put on my designer hat and plan ahead. Not that explorations don't happen - they always happen. The experience is more about setting constraints and working out solutions within those boundaries rather than letting any impulse in.

Which means my work gets pushed in two directions: one outward, one inward, simultaneously, or at least within hours or days of one another. It's a tug-of-war I have often thought I have to resolve, to commit to one direction in my studio practice. Yet they both serve me well, help to balance out my brain and my creative impulses.